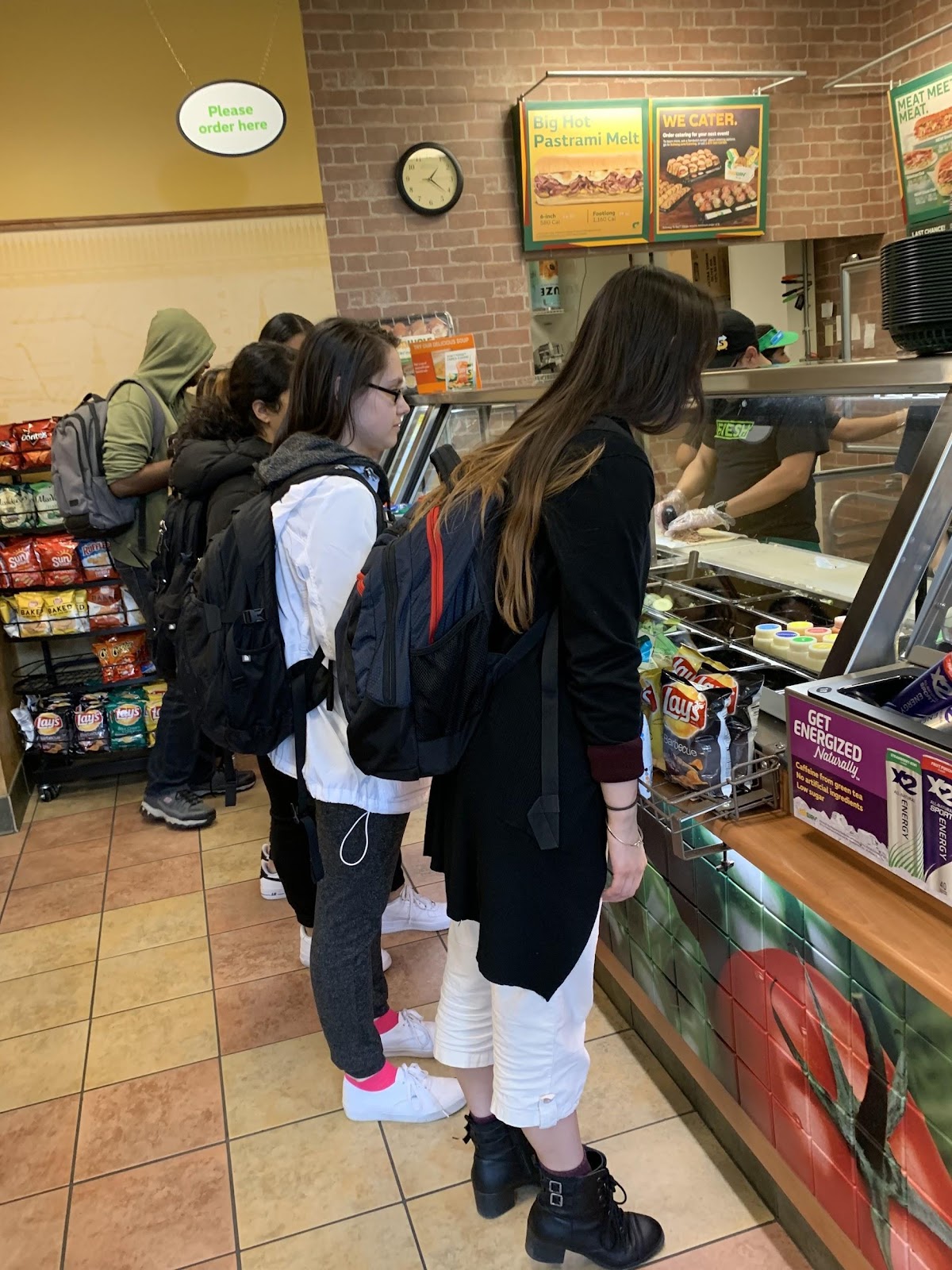 Food and restaurant options at the University of Washington Bothell are in a struggling shift towards incorporating more diversity, affordability and sustainability. Janel Nonhoff, the Dining Services Manager, says there is a lot of movement and changes in the works for the future.

In the last year, students have made it clear  that they are unhappy with their available food options. According to Umar Shah, a former student affairs spokesperson, there have been several unsuccessful petitions against Subway, the only sit down vendor restaurant on campus. He said, “students have the right to healthier alternatives that meets everyone’s financial and dietary needs.”

Recent additions include local food trucks that park in front of the Activities and Recreations Center, which adds more culturally diverse food options. The two cafes on campus, Food For Thought and The Common Grounds, have brought in healthier options from sources like Molly’s and Shine, who provide packaged salads and sandwiches. However, most of the items are over seven dollars.

The Husky Pantry is also a resource for all UW Bothell students who might be between paychecks or just need some extra resources to get through the week or month. The Husky Food Pantries may be accessed by any UW Bothell student who is facing food insecurity and use of the Husky Food Pantry is anonymous, only recording what food is taken. There are two locations including the Husky Village Community Center and the Student Diversity Center.

When deciding on food sourcing companies, Janel Nonhoff says that they use price, delivery schedule, customer ratings, and packaging as determining factors.

In a 2018 study by HOPE labs, they found that 36% of students were food insecure within 30 days prior to when they took the survey. Food insecurity is when one does not have reliable access to a sufficient quantity of affordable, nutritious food. Several researchers also from HOPE labs have found that food insecurity is correlated with lower grades in college.

Food options on campus can also be deciding factor when students begin to look for colleges to attend. There are no food plans available at the University of Washington Bothell like those that are offered at other campuses. Even though University of Washington Bothell is recognized as a commuter school, students spend several hours on campus. The timing of classes range from as early as 8am to as late as 10pm, which indicates that there should be food available that is appropriate for all meals throughout the day.

The location of the school makes it hard for students without a personal vehicle to get around, limiting their options to what is on campus already. The campus’ location also limits UW Bothell’s access to vendors since the school often tries to piggyback off of deals made by the Seattle campus. But since UWB is a small campus and out of the way of Seattle vendors, many are unwilling to make the journey over to Bothell.

A senior at UWB, Daniel Golt, says “I don’t feel like there is enough variety, and [the food] isn’t fairly priced. I also wish the Subway was a Chipotle.”

Some challenges the university is facing is space to store food, having enough power for fridges, and getting regular deliveries. In a perfect world, Janel imagines a dining hall space on campus that has several different food stations including asian, mexican, a salad bar, italian etc. Currently the campus is a third party dining service, so there is little capacity to make food on campus.

Below is a pie chart of results by a survey that was conducted to see what types of foods students want at UWB. Out of 100 respondents, it represents each student selected multiple food choices showing that variety is in high demand.Data provided by Natalie Gray, graph made by Damola Muse. 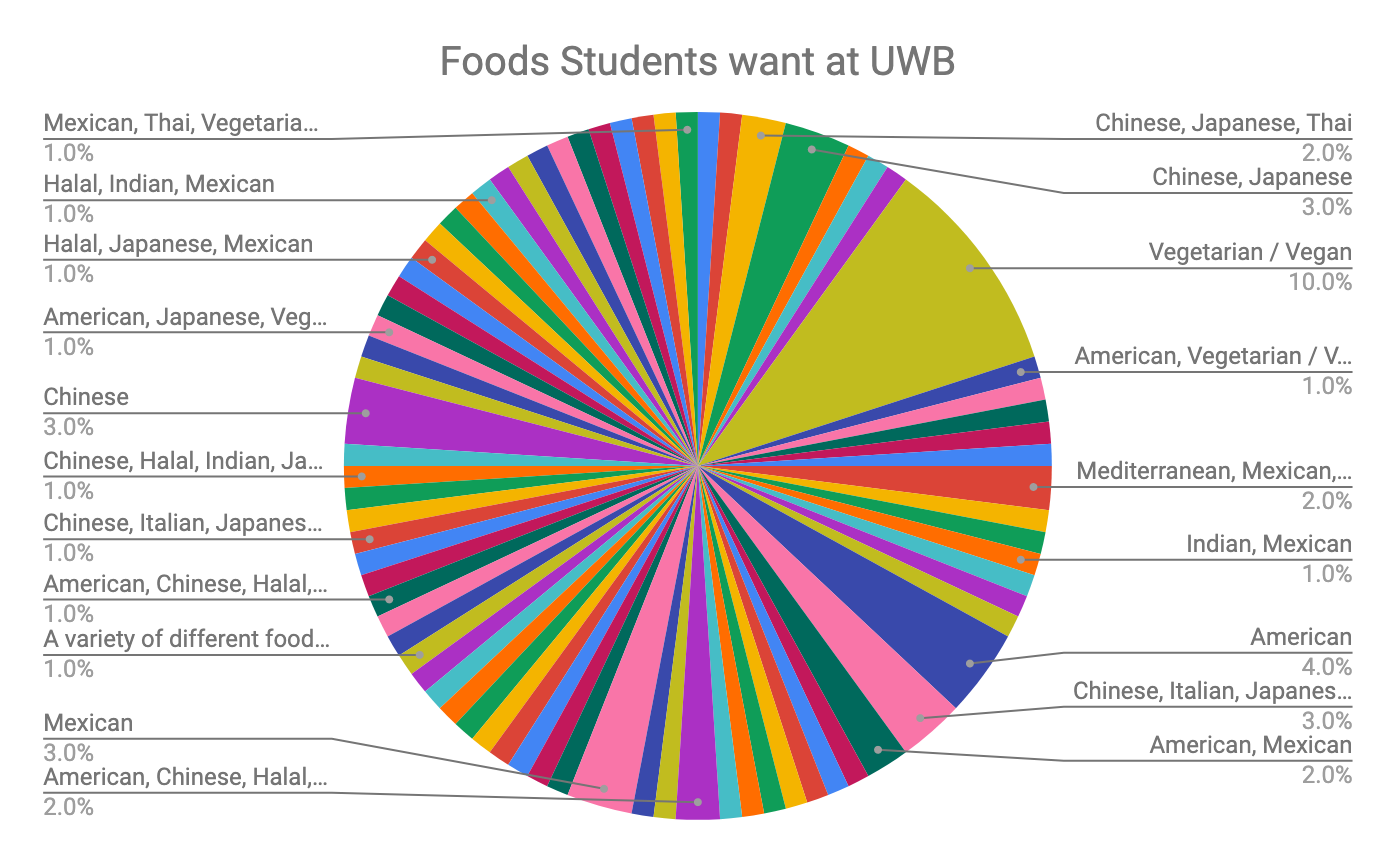 Dining services often hears about survey results second hand, done by students or other organizations affiliated with the school. Janel says they hear the desire for “more vegetarian and vegan food,” but that is often the types of food that end up doing to waste. “We are a business model more than we are a service model,” She says “and we have to take our results into account.” In recent findings, candy bars, bubble tea, and coffee were the most popular items bought in the cafe.

University of Washington Bothell is the 12th university in the country that makes sustainability efforts according to bestcollegereviews.org. Alexa Russo, the UWB sustainability coordinator, has some ideas on how the campus can develop a more sustainable food system. She suggests swapping all the candies and processed junk food in the cafes for vegan, organically sourced snacks. She also wants to incorporate a way for the food already grown on campus to have some impact on dining services. Alexa emphasised that vendors such as food trucks should meet sustainability standards as well.

“To say the food situation on this campus is disappointing is an understatement, and due to the food insecurity that our campus faces, and the price of the unhealthy options that we have here, we are in a crisis.” Alexa states that “your vote equals your dollar” and suggests to get involved with the campus farm to learn more about sustainable food.

There is such a wide range of wants and needs when it comes to food at UW Bothell. Janel calls the campus very “food savvy” because of our diversity. The student body and faculty have voiced that the discussed accommodations should be taken into consideration by the administration. However, the process of change is long and  complicated, with many behind the scenes factors that students are unaware of.

Student involvement is key to making a change in this manner and voicing your opinion to administration is extremely powerful. To start, students can reach out to the Director of Auxiliaries, which is Chelsea Knodel. She is willing to listen to students concerns and advocate for them as long as it is in reach of their capability.